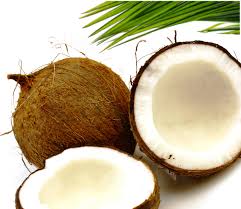 It seems like everywhere I go lately someone is singing the praises and benefits of one coconut product or another.  In one week’s time I heard all about the super benefits of coconut oil from my hairdresser and the checkout lady at Costco and was asked by my Aunt & Uncle whether they too should buy some and use it often.  Dr. Oz is on board too, and we all know stock goes up on products that he approves of.  But, is there any actual evidence to support the claims being made?

Weight Loss
Dr. Oz says that coconut oil is “the miracle fat that fights fat.”  The problem is that when you look for evidence to support that claim, there is none.  The one very small study (40 women) done in 2009 by a Brazilian master’s degree student found only minor changes in body composition, a difference in waist size of half an inch for those participants using coconut oil.

Much of the interest in coconut oil stems from the fact that it is about 60% medium-chain triglycerides (MCT). “Medium” refers to the chain length of the fatty acids. Oils can contain short chain, medium chain, or long chain fatty acids. Most oils are a combination of all three types.

We know that MCTs are metabolized differently than other fats found in oils and are more likely to be burned as fuel rather than stored as fat – which is where the claims for coconut oil being touted as a weight loss tool came from.  In several small studies, dieters who ate 1-2 Tablespoons of pure MCT oil a day for 3-4 months lost about 1 more pound a month than dieters who used other oils.

Although coconut oil is a source of MCTs, it is not the same as 100% pure MCT oil.  According to Marie-Pierre St-Onge, an assistant professor at Columbia University’s Obesity Research Center, the effect of coconut oil on metabolism and weight is likely far less than that of pure MCT oil.

If you are thinking about running out and buying some MCT oil, keep in mind that it is not an oil found in nature, but instead is manufactured by machine.  Natural is always better.  It will cost you too.  MCT oil costs 3-5 times more than other perfectly healthy oils like olive and canola – which is what we use at my house. Remember weight loss has only been shown to be minimal in people using MCT oil.

Alzheimer’s & Dementia
Another very popular claim is that coconut oil or again MCTs can possibly prevent or treat Alzheimer’s disease and dementia.  No real studies have been done to test whether that is true.  According to the Alzheimer’s Association, “There’s never been any clinical testing of coconut oil for Alzheimer’s, and there’s no scientific evidence that it helps.” As much as we want to believe that this could be the magic tonic that keeps us and the people we love from suffering with this awful disease, unfortunately the evidence just isn’t there to support such a claim.

Heart Disease
Conventional coconut oil, the kind found in various products such as cereals, baked goods, biscuits, some coffee creamers and candies, is made from dried coconut that is pulverized, cooked, and treated with chemicals. In studies on animals conventional coconut oil raises cholesterol levels. There is also a “virgin” or “cold-pressed” coconut oil that proponents say is better for you. But, again, studies looking at the effect of coconut oil – whether virgin or conventional – on heart disease in humans is lacking.

Bottom Line
So, what do you think?  Is there evidence to support all of the extreme claims about coconut oil’s health benefits ?  I say no.  If you want to use it occasionally here and there to cook with fine, but until we know more, I wouldn’t let it replace good healthy oils like olive and canola oil and I definitely wouldn’t recommend taking it by the tablespoonful on a daily basis.  No matter how you look at it, one tablespoon of coconut oil has 117 calories and 13.6 grams of fat, around 90% of that estimated to be saturated.  Eat several tablespoonfuls a day and the extra calories will add up.

Fad products and gimmicks come and go and have for a long time.  It is easy to get caught up in hearsay and testimonials.  You should automatically be skeptical of something that claims to be a “miracle cure-all”.  Be a smart consumer, do your research – or find an expert who can do it for you – and know what you are buying.